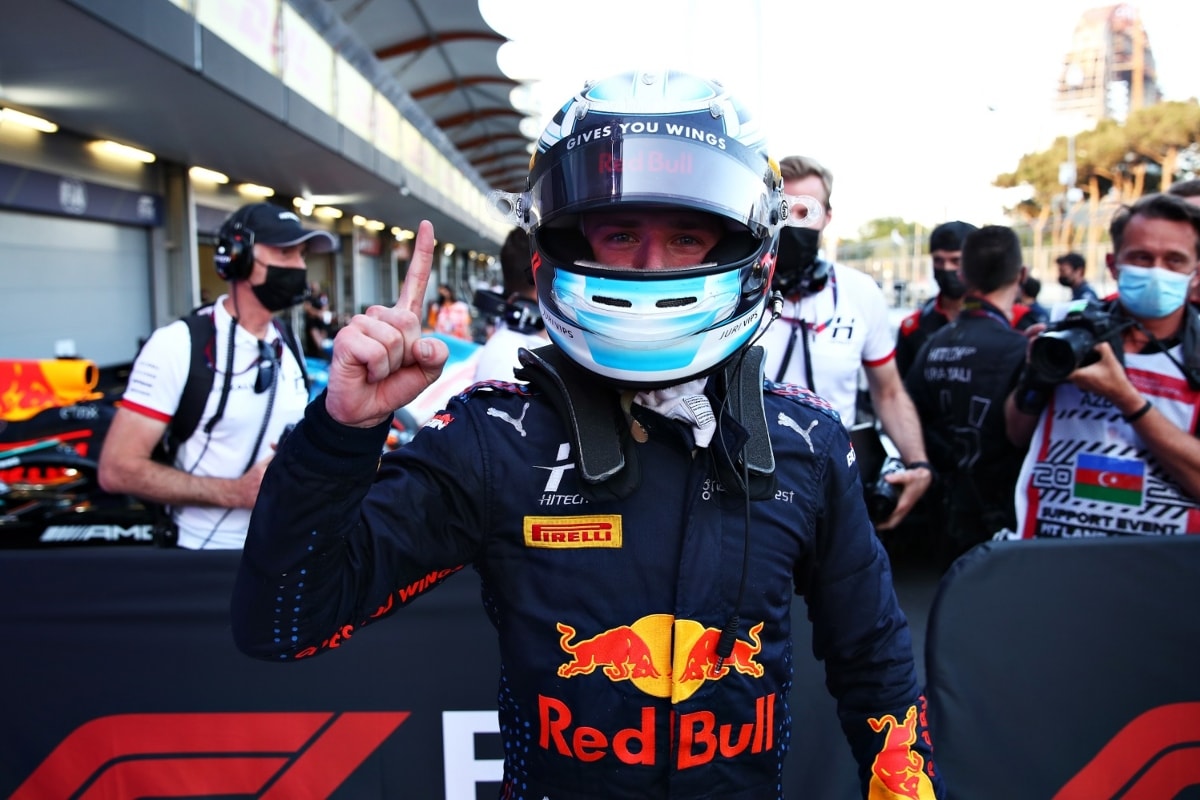 Hitech Grand Prix’s Jüri Vips kept his nose clean in a chaotic Sprint Race 2 in Baku to take his first-ever win, in Formula 2’s 100th race, putting on a controlled performance amongst multiple stoppages and six retirements, to finish ahead of Charouz Racing System’s David Beckmann and Carlin’s Jehan Daruvala. Baku is proving to be somewhat of a kick-starter for pre-season title favourites in F2, with Vips joining Robert Shwartzman in taking a maiden win of the season, the duo both bouncing back after disappointing starts to the year.

It was far from plain sailing though, as the Estonian had to work hard for the win. Starting from third, the Hitech driver survived two Safety Car restarts while working his way past Bent Viscaal and David Beckmann.

Despite putting up a good fight, Charouz rookie Beckmann had to settle for second ahead of Daruvala, while reverse polesitter Viscaal dropped down to fourth.

Shwarztman followed up his maiden win with fifth ahead of Dan Ticktum, who recovered from an opening-lap crash to take sixth. Liam Lawson made up 13 places to seventh, with Oscar Piasti taking the final points’ place.

After a frantic start to the first sprint race, the majority of the field were just hoping to get through the opening two corners unscathed, but that wasn’t the case, with several incidents off the line. Guanyu Zhou and Ticktum locked-up and spun at the first corner, shortly before Ralph Boschung was caught by Théo Pourchaire.

Having kept his nose clean inside of the opening two corners, Beckmann threw his Charouz around the outside of reverse polesitter Viscaal at Turn 3, going wheel to wheel with the Trident, before braking daringly late at Turn 4 and coming out inches ahead of the Dutchman in first.

The Charouz got his move done just in time, as a Safety Car was then required to clean up the Turn 1 incidents. Ticktum and Pourchaire had dropped down the field, but both managed to get going again. Zhou and Boschung weren’t as lucky, with both forced to retire from the race, along with Lirim Zendeli, the MP Motorsport driver having gone wide at Turn 2.

Beckmann aced his restart when the Safety Car returned to the pits, but Viscaal lost another position, falling to third behind Vips. Further back, Pourchaire’s race went from the bad to worse, with his team spotting damage to his front wing and calling him into the pits for a change.

The Safety Car wasn’t back in the pitlane for long, as Roy Nissany struck the back of Richard Verschoor and dumped the Dutchman’s MP Motorsport into the wall.

After several more laps under Safety Car conditions, Beckmann nailed another restart, while Viscaal attempted to reclaim second from Vips, but the Trident ran wide and dropped down to fifth, behind Daruvala and Marcus Armstrong.

Yet again, there was drama further back when racing resumed, as Felipe Drugovich caught Christian Lundgaard and spun the ART Grand Prix into the wall at Turn 1. Armstrong’s DAMS ended up in the wall as well, suffering from a case of cold tyres as he attempted to pass Viscaal.

Only a Virtual Safety Car was required on this occasion, but six retirements and three separate stoppages had given the order an almighty shake-up. Ticktum was back up in sixth, despite dropping to last after his opening lap crash, while Lawson was up to eighth, having started in 20th.

The latest race restart didn’t go as smoothly for Beckmann, the German just about clung on to first but had Vips all over his rear wing. The Estonian waited patiently for DRS down the main straight and decisively lunged down the side of the Charouz for the race lead.

All of that action came inside of a manic 10 laps, but action cooled from there, with the field wary of taking too many risks, given the incidents they’d already seen. However, having already made up 12 places from 20th, Lawson wasn’t opposed to taking a few more risks and dove down the side of Piastri to snatch seventh.

Almost everyone else seemed to be happy to stick where they were though. On course for his first points in fourth, Viscaal was keeping third-placed Daruvala in his sights, hoping the Carlin made a mistake.

That mistake never came and Daruvala held on to the final podium spot as they crossed the line. In front of them, Vips crossed the chequered flag unopposed as well, beating Beckmann by 3.2s.

“A very good day for us! I don’t think I had the best first race, but we learned a lot from it and in the second race, our pace was really good.

“It wasn’t a straightforward race at all, I had to really fight for it, but in the end, I got into the lead and I never looked back. It is a good day and I have another chance to win from second tomorrow, so I am looking forward to that.”

Finishing outside of the points, Guanyu Zhou retains his place at the top of the Drivers’ Championship on 78 points, but Piastri has moved into second, tied on 55 points with Pourchaire, but ahead of countback. Dan Ticktum is fourth with 54 points, ahead of Shwarztman who is fifth with 51 points.

UNI-Virtuosi remain at the top of the Teams’ Championship with 107 points, ahead of PREMA on 106 and Carlin on 101. Hitech Grand Prix are fourth with 80 points and ART Grand Prix fifth with 71 points.

Catch all the action from FIA Formula 2 Championship LIVE on Eurosport and Eurosport HD. The same can be streamed on the discovery + app.